Trade in Your “To Do List” Guilt and Become a Victory Lady! 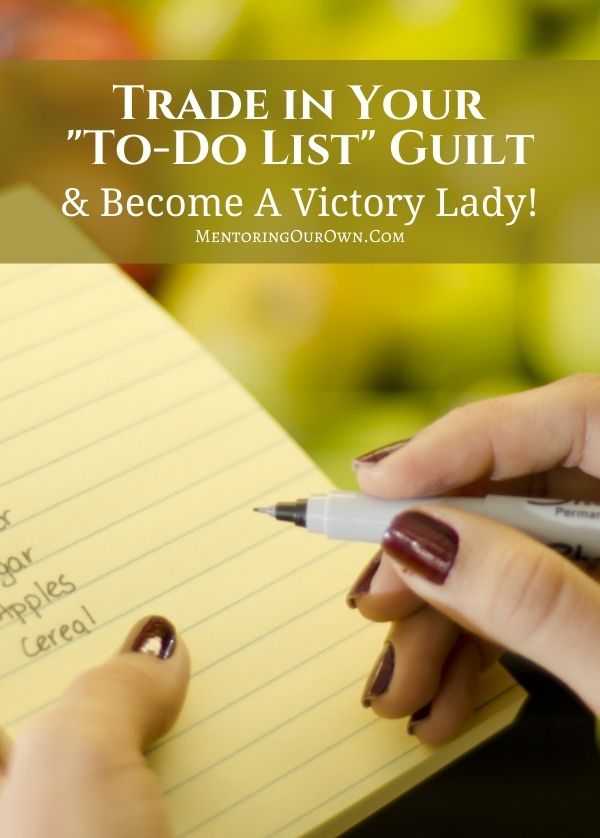 Does your "To-do List" make you feel guilty and sometimes overwhelmed? Most of us do not need a list to tell us what needs to be done, because we are reminded every day by what we see with our own eyes!

I feel that we (as wives and mothers) do not give ourselves credit for all that we accomplish. Some days, we feel like we just did not get much done, because we are focusing on the list of things to do.

May I suggest that if we are weighed down by the "to-do list" quilt, maybe we are focusing on the wrong list? I am not suggesting that a "to-do list" is completely unnecessary. We can and should be informed by it. I am suggesting that we would be better served by shifting our focus to our Victories.

Several years ago, I was thinking about all that I needed to do. I had a lot to do! So, I decided to maximize my efforts. I first got my electrical slaves working by starting laundry, grinding some wheat to make into bread, and then starting the dishwasher. Then, at a random moment, I grabbed a piece of paper and put it on the refrigerator door. I was curious to see what I actually would accomplish during the day. I planned to just list things after doing them.

The list grew:
Sorted Laundry
Started a white load
Ground Wheat
Mixed Bread
Put Two loaves in pans to rise
Put four formed non-risen loaves in the freezer for my next baking day
Loaded and started the dishwasher
Put a white load in the dryer
Started a dark load in the washing machine
Wiped Counters
Baked bread
Swept kitchen floor
Dusted living room blinds
Folded and Hung up whites
Put whites away
Put darks in the dryer
Started a towel load in the washer
Buttered bread loaf tops
I read aloud with my daughter
We took a walk...

You've got the idea! I included every task, no matter how small. It all got listed on that paper. I jotted down everything that I had done. Then I discovered something-- the more I jotted down, the more I felt empowered, and the more I wanted to add to the paper. My husband did not ask what I had done that day. He saw the list. He said, "Wow, you got a lot done today! I smiled and said, "Thank you." I realized I did a lot every day. It is just some things are not seen immediately, but the impact of not doing them is felt. The Victory List helped me see my life in a clearer light. That day, I became a Victory Lady. Changing my perspective changed my life!

As I became a Victory Lady, I began to place more focus on recognizing the things I finished, rather than on the "endless hanging on, of unfinished tasks." This was very liberating!

I also began to focus more on what my family members had accomplished. When I acknowledged the efforts of others more, it began to strengthen my relationships with them, boost their confidence, and naturally lead to more cooperation.

I then took this one step farther down the road. I worked to develop simpler routines of good habits. Many things I had on my "to-do lists" began to be accomplished through simple daily habits and routines. I still listed each thing I did. I rejoiced all the more in those victories. I began to keep a victory journal.

I invite you to join me and become a Victory Lady, too! Keep a Victory Journal; it will amaze you. Do not just list the things done, but also include how it made you feel and how it impacted your family, and your life!

Become a Victory Lady and embrace the joy to be found in the journey!

Each month, I write newsletters with helpful tips that impact homeschool moms on topics such as: homeschooling, homeculture, momculture, and home management. I also inform moms of site news, upcoming events, new products, and special offers.