A lot of homeschool moms get the question- "What about socialization?" This question is usually asked about the children. However, moms need socialization, too!

In generations past, most children were home with their mothers until kindergarten or first grade. This was so for 75% of the post-World War II Baby Boomers when I embarked on parenthood. This generation was the vanguard of the modern homeschool movement. They blazed the trail for homeschool families today.

By the time Millennials were born, the demographic shifted drastically. 75% of moms were in the work force and children were often tended by daycare providers in small to large groups. As they became parents, it has been  natural for them to seek group socialization for their children. Many, but not all, seek time away from their children, to socialize.

I am a Baby Boomer. In the generations before me, it was women who nurtured women, through quilting bees, preparing charity baskets, and preparing for church bazaars, and this was usually done in groups. Most fathers worked and moms often brought their children in tow, to help at these events. So, women got their socialization with other women, and more often than not, their children socialized at the events, with other children, as well. 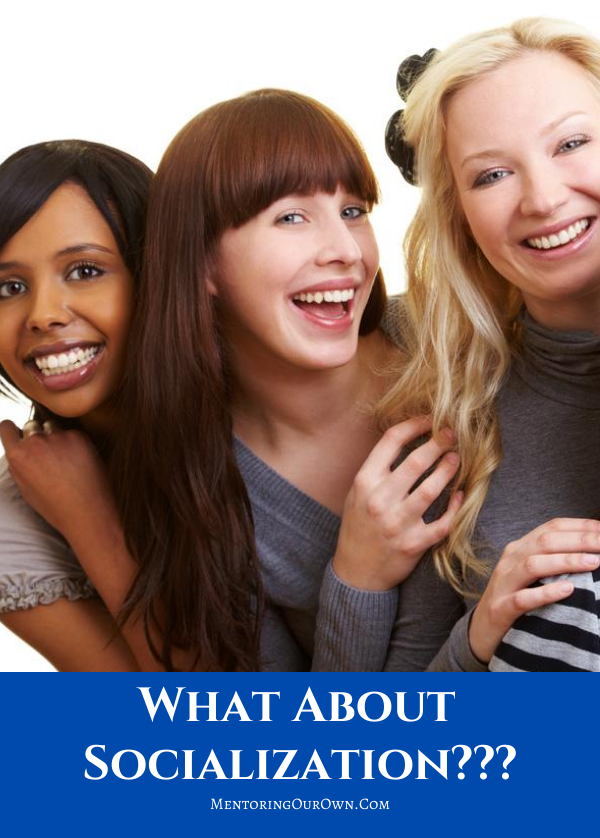 Ways for Moms to Socialize

I have seven children and a 20 year gap between the oldest and youngest. I did not do all the things below at the same time.

How My Married Daughters have Socialized

I have two married daughters who homeschool. Both have three children and their children are five to eleven. What do they do to socialize? They are blessed to have husbands who work from home. However, they live close enough and sometimes grandma and grandpa will watch the grandchildren and spend time with them at the park, or this grandma teaches them art lessons. My daughters sometimes will go to lunch with a friend. Sometimes they gather at a home and take their children, too. Sometimes these daughters attend events or lectures. Sometimes they meet with other likeminded moms. My ome daughter does events with her tribe of lifestyle bloggers. These events are often in the evening so the children are with dad. Both go to lady’s night at church and other church events where they get to socialize with women, as well.

Most of the things I have shared here, take little planning and are little to no cost. Hopefully, I have shared ideas on socializing that will help you. Take time to socialize, even if it is with your children and other moms with their children in tow.

How you have chosen to socialize?