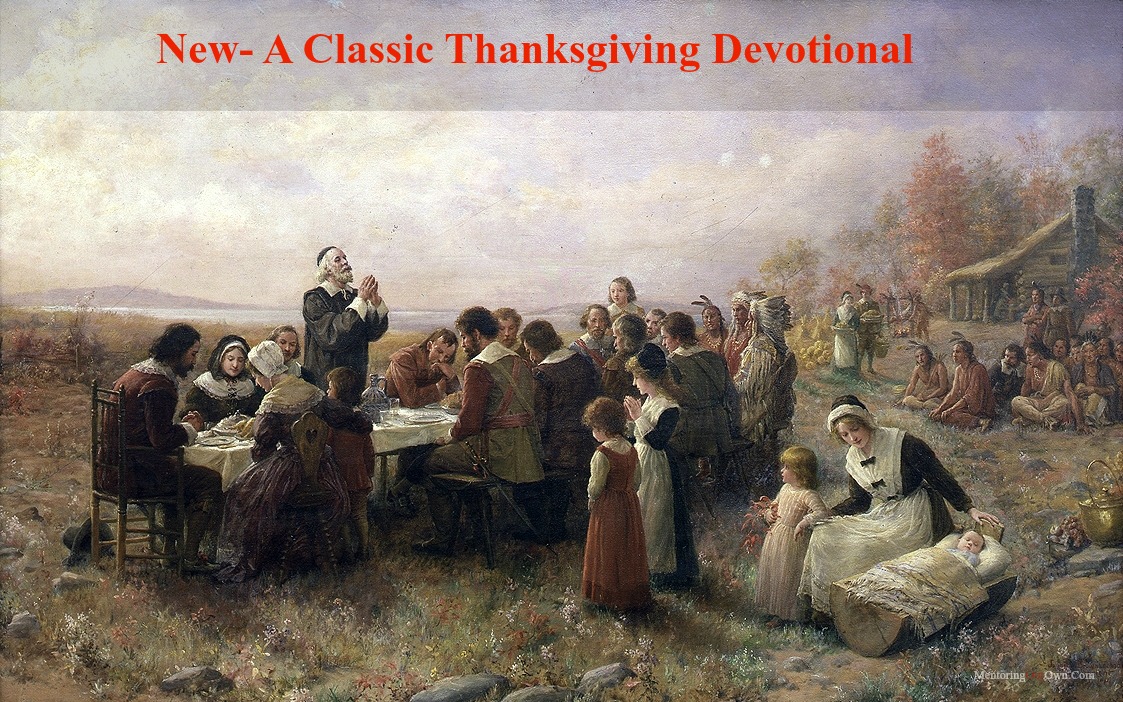 Are you tired of Thanksgiving being lost between Halloween and Christmas?  One day a few years ago, my husband remarked that in the world, Thanksgiving seemed to be just a day for a big meal and to watch football. Lately it has become part of the huge retail weekend before Christmas, with Black Friday and Cyber Monday.

I wanted something more for my family. For me, I wanted Thanksgiving to have its due. It is a time to give thanks to God for our bounteous blessings. Even in lean years and times of great trial, we had much to be thankful for. Yes, we all endure times in our life of great trial. The Good Book says we should "be thankful in all things." I wanted my family to use the whole month of November to focus on giving thanks to God. So, my oldest daughter and I set out to create a way to celebrate Thanksgiving all month long. We created a daily devotional, patterned in concept after a Christmas Devotional we had been using for about two decades.

This year we had an idea for a new Thanksgiving Devotional; one focused on using classic expressions of gratitude. There are plenty of new Thanksgiving poems and expressions about turkeys who got away. I wanted to focus on cultivating gratitude. I also wanted to look beyond the struggles of life and to really focus on the blessings. The Pilgrims did that. They had lost so much that first year, but yet, they were able to give thanks. The older classic poems, hymns, and stories seem to reflect more gratitude. So, we reached into the past.

My father was born on Thanksgiving Day, after his father, grandfather, brothers, cousins, and uncles, had hunted, brought in food for the feast, the women, including my grandmother had prepared the feast, and the family had given thanks and eaten. He was born on Thanksgiving Day 29 November 1923, when Thanksgiving was the last Thursday in November. During the Great Depression Franklin D Roosevelt changed the day we celebrate Thanksgiving to the fourth Thursday in November. All the poems, hymns and stories in this devotional were selected from before my father was born.

A Classic Thanksgiving Devotional is a 30 Day Anthology of 157 pages of daily Bible Verses, gratitude quotes, gratitude poetry, hymns of Thanksgiving, Thanksgiving Proclamations, and Classic Thanksgiving Stories! While some may read and use everything each year, others may focus on different aspects of the devotionals as fits their families. Some may share it in the morning to set the tone. Others will share it in the evening as the last thoughts of the day. Some may split it up and share the Bible verse, quote and activity in the morning, then end the day with the poem or hymn and a proclamation or story. Customize the devotional for your family.

Are you tired of Thanksgiving being lost between Halloween and Christmas? Do you want to help your family see that Thanksgiving is more than a feast and a day to watch sporting events?

I'm so excited for this! Thank you, Donna.

Thank you. I am looking forward to sharing the new (new to us) devotionals and the Acts of Thanksliving Activities with my family too.