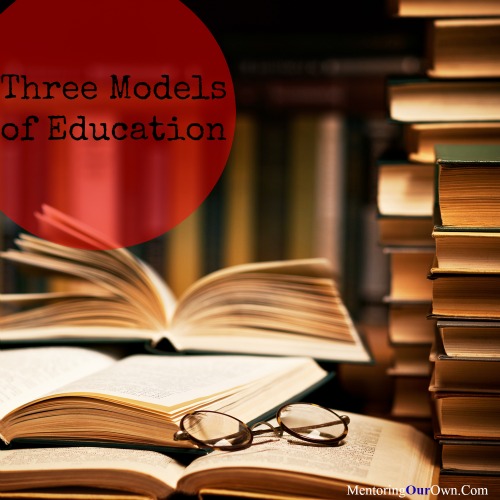 Throughout history there have been a few competing models for education of children.
Individualized Education
From the beginning of time parents passed their knowledge from parent to child. Some also hired mentor, tutors, or governesses to assist in teaching their children at home. Home education is the oldest form of education. It is also the main education of the elite over the centuries.

Private Education
In most societies there was a professional class, as well. From time to time private tutors, apprenticeships, academies, and private schools were created with an eye to prepare young scholars for a profession in law, medicine, or the clergy. Other apprenticeships, private guilds, and associations were created to train artisans. This was the education of the middle class over the centuries.

Public Schools
Conquering civilizations used schools to train captives to think as the ruling elite deemed. Though ancient Israel had nations around them that used public schools, Israel did not engage in the practice until after Babylonian captivity. In Babylon, Israel was forced into public schools for the purpose of re-education and assimilation into a new worldview. In the Modern World, mass public education was an education designed for the working poor, first as universal child care and then a basic education. True, in cultures that used mass public education, the level of standard of living increased to a point. While this education has raised the standard of living of many, public school was not designed to create leaders.

Pre-Babylonian Israelites were surrounded by cultures that had schools, yet the Israelites chose to have no schools for their children. The Israelites were not anti-education, far from it. They took education very seriously. Their method of education goes back to God’s commands through Moses found in Deuteronomy 6: 7

Education to them went far beyond the secular memorization of facts. It was not simply a nine to five career education, but an education for a whole life. They believed that God had charged them to teach their children moment to moment about Him and His ways. If they outsourced the education of their children to others, they could not keep the commandments.

When Babylon took the Israelites into captivity, they put all the children of the captives in mass public schools. They did this to produce a citizenry that was integrated into their culture and to make them citizens, compliant to Babylonian rule. After this schooling, when the Israelites went home to Israel, Sabbath schools were introduced into Hebrew culture. Those schools were generally for boys only and met once a week. They were usually found in larger towns. Nazareth was a small town. It is unlikely that Jesus ever attended a Sabbath School. Yet, no doubt he was well educated, as we see when he spoke with the scholars in the temple when he was twelve years-old.

During inter-testament times, about 356 BC forward, wealthy merchant class Jews wanted their children to be accepted by their non-Jewish neighbors. These parents sent their sons into the city Gymnasium (like high School) to attend school with their gentile neighbors. Mingle their children did, and they embraced the Gentile culture, and turned away towards evil.

“In those days certain renegades came out from Israel and misled many, saying, ‘Let us go and make a covenant with the Gentiles around us, for since we separated from them many disasters have come upon us.’ This proposal pleased them, and some of the people eagerly went to the king, who authorized them to observe the ordinances of the Gentiles. So they built a gymnasium in Jerusalem, according to Gentile custom, and removed the marks of circumcision, and abandoned the holy covenant. They joined with the Gentiles and sold themselves to do evil.”

All this added more to the undermining of the Jewish faith.  The pre-Diaspora Israelites had been right in keeping the commandment to teach their own children. In educating their children in the home, they passed down their faith, their culture of faith, parenting skills, work ethic, literacy, numeracy, entrepreneurship, and more. All this was passed on from generation to generation without textbooks, classrooms, tests, and a professional teaching class. Once that mindset was set aside, other agendas followed.

All of these methods have been around for a long time. Yet, for many, when you mention education, the image that appears in their mind is public school.

While these methods of education all go back into antiquity, each model of education has more recent influences. Public schools of today have their origins in the factory model of the industrialized revolution. these were designed as a combination of childcare and schooling for poor working class factory workers. The private schools that feed into professional schools have a tradition growing from the guilds and associations of the middle ages. Then there are the more individualized approaches we find in home schools and private tutors, which were often found in the education of the elite ruling classes. I will refer to these three as conveyor-belt (public, charter, and private schools), professional (private and independent preparatory schools) and leadership education (Individualized and home school).