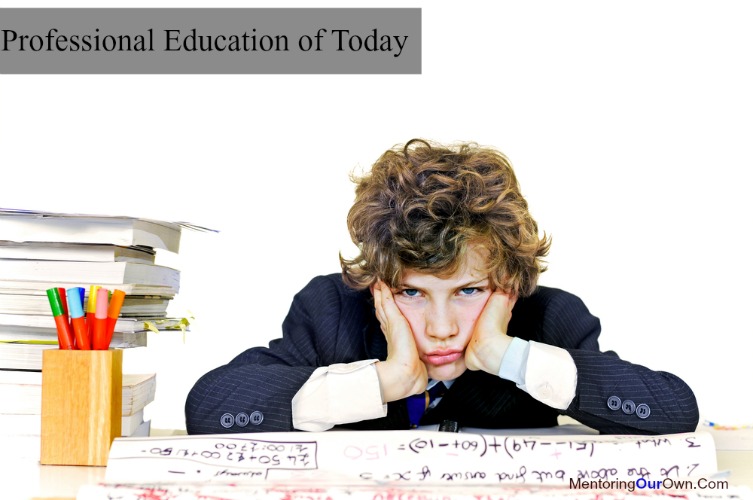 Professional education of today, grew out of the medieval guilds, associations, and the cathedral schools that Charlemagne proposed. Charlemagne saw the need for educated clergy and local government officials. He wanted to make the education available to any boy who was smart enough and wanted to. Priests running cathedrals and monasteries were asked to create schools. The priests and nuns taught in these schools. Only a few cathedrals and monasteries created schools before Charlemagne died.

There were also ancient influences on the development of professional training and universities, such as Greek academies, museums, and ancient libraries. However, the predominant shaping force of university professional training was developed in medieval Europe. Small cathedral schools provided the higher education mostly for clergy through the ensuing two centuries. Under Pope Gregory VII there was a renewed push for the cathedral schools to train priests.

As Europe moved from the Dark Ages into the Renaissance schools began offering training in other fields, such as law, mathematics, and medicine. The universities that emerged from the educational incubator became their own kind of conveyor belt. Courses became systematized and degrees awarded. The quality of many of these schools waned as they lowered standards to attract more students. Bachelors, Masters, and Doctoral Degrees were awarded and this was like a stamp of approval showing that the person had received the training and that no further inquiry into their abilities was needed. This tended to lead to mediocrity and people placing more value on the degree than on mastery. As universities emerged, training for fields other than clergy developed. The education these schools provided, created a professional class, or an expanded middle class, between the common man and the ruling elite.

Today, professional training is available at both state run and private universities. Competition for some of the elite schools begins in preschool, where parents are putting their children on waiting list while the mother is yet pregnant. Promoters tell parents that if their child gets into a certain preschool, they will be able to get into a certain grade school, then junior high, high school, and finally into a certain university. University students take on enormous debt to get degrees from elite schools.The tuition at some of the elite preschools (http://www.forbes.com/2007/09/18/education-preschool-kindergarden-biz-cx_lm_0919preschool.html) can exceed the cost of a good college education at a non -Ivy League school. Private primary and secondary education at schools such as Punahou in Hawaii where President Obama attended can be pricey. Currently Punahou charges $19,500 per year, K- 12. Even back in the 1970s tuition at Punahou could purchase a new car. It is not uncommon for students to graduate from elite and big name universities with a degree and a several hundred thousand dollar debt. Those choosing this path for their professional degrees feel it is worth it to have a branded school on their degree.

The aim of professional training is to teach people what to think at a very specialized and higher level. We want well trained doctors, dentists, and lawyers helping our loved ones! As degree training is becoming more narrowly focused, is this really education or is this high level conveyor belt training? Consider pre-1930s Germany. They were a very highly trained society. They had been taught what to think instead of how to think. Their specialties had grown narrow.

The preparation for professional careers, do not have to be this way. Children can be taught not only what to think, but how to think.

The aim of leadership education—to teach children how to think.