NO Busywork, Worksheets, or Workbooks? (‘Rithmetic) 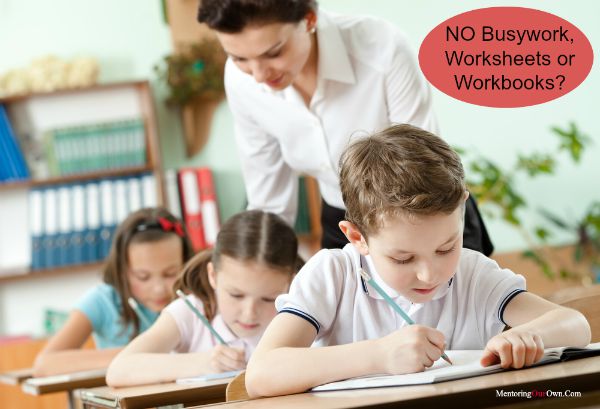 Elementary Math is probably the single largest area of busywork, worksheets, and workbooks in a child's school experience. This need not be so.

When my older children were young I read a book called "﻿﻿Innumeracy: Mathematical Illiteracy﻿﻿" by John Allen Paulos. This made me aware that I needed to use rich descriptive language around my children. So, my children grew up in a home where mom used quantitative language and they had an opportunity to sing counting songs, learn counting rhymes, read analog clocks, find hymnbook page numbers, read numbered verses, read thermometers, learn oven settings, counting mile posts, watching the odometer, counting canning jars, setting the table, doubling recipes, figuring out how many ways the food got divided, and gauging life in so many ways.

​When I taught my oldest three children, I used "Arithmetic Made Simple" (1960 Edition) by Abraham Paul Sperling; Samuel D Levison, as a road map to teaching Arithmetic. It covers basic math to the introduction of Algebra, is mastery based and is absent the busy work. We learned a new concept and then "played" with it on the blackboard by making up problems. Math was a game!

​Then when I taught my younger four children, I developed the Power of an Hour: Gateway to a Classical Education, for them. The Power of an Hour includes Math History and Living Math every other week. This way they have two weeks to become comfortable with a new concept. I included math history because I wanted my children to understand the great ideas mathematicians struggled to solve. I wanted to give more context to Math. I also used Steve Slavin's book, "M﻿ath for your First and Second Grader: All You Need to Know to Be Your Child's Best Teacher," during our one-on-one learning time.  This was easy to use, busywork free, hands on with items found in most homes, and it included short chapter tests, and end of year tests. We worked through the whole book and it gave a solid foundation. Then we went to the Arithmetic Made Simple book. Right now, if I come to a Math operation I am trying to teach my daughter and she is not getting it, I can do a google search on how to teach that concept and find several ways I can uses. Sometimes we just need to approach things differently. These two mentioned books are a road map of what to teach. (Since writing this post I have discovered that Steve Slavin has written several self-paced self-teaching math books for upper math, as well.

When children learn and can demonstrate math, they like to show off. Dad will see their progress. A portfolio and the Math Commonplace Book should demonstrate what they are learning. As you can see, busywork, workbook pages, and worksheets are not needed.

In what ways do you teach your children or help them learn without using busy work, workbooks, and worksheets?

Here is another math link to ocnsider:

Why Math Education in the US Doesn't Add Up
https://www.scientificamerican.com/article/why-math-education-in-the-u-s-doesn-t-add-up/