Lesson of the Empty Tomb 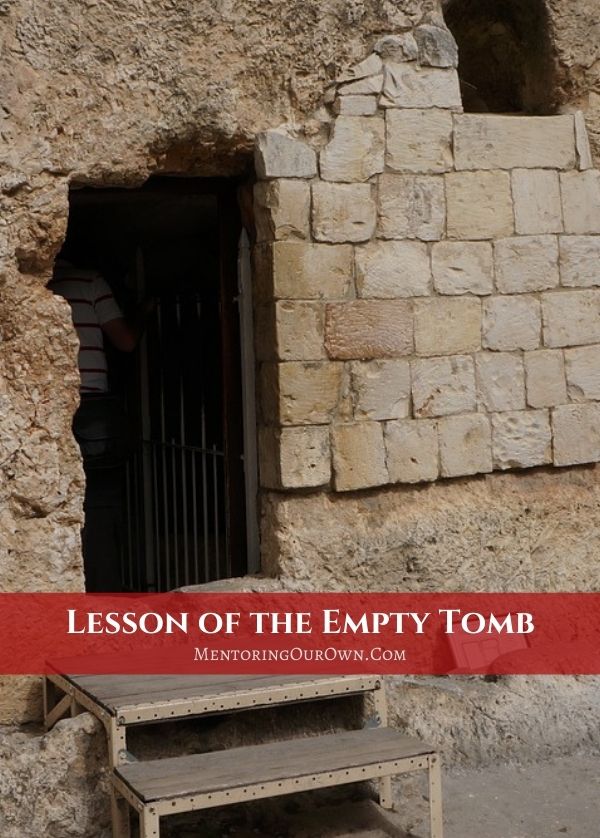 We have a family tradition of the Lesson of the Empty tomb; we would like to share it with you.

As part of the Passover meal, Jews ate a roasted egg. It was easy to prepare, it represented mourning, the freeing from their bondage to the Egyptians, and their freedom from Egyptian paganism. Part of the pagan religious observance of many Egyptians was the abstinence from meat and eggs. So, the roasted egg carried a lot of meaning to the Jews. After the crucifixion and resurrection, many early Christians were Jews who accepted Jesus as their Messiah. The Passover tradition of the roasted egg represented freedom from bondage, from Egypt, and to Christians it represented the empty tomb. No longer was the egg a symbol of mourning, but became a symbol of freedom from the bondage of death and became a symbol of hope.

The Lesson of the Empty Tomb

We used twelve plastic eggs to tell the story of Jesus' last days and resurrection. I prepare our basket and lesson before Sunday. On the outside of each egg, I number the egg with a different number, from one through twelve.   Each egg has a slip of paper with a different scripture and an item that depicts Christ’s story, using small pieces and strips of each item, the last one is empty, for the Empty Tomb.

On Resurrection Sunday we pass the basket around to all those present and each one gets to open an egg, carefully, and in order, then review the Life and Resurrection of Christ.

Place the scripture and object in the egg numbered.

Scripture: Matthew 26:14-15
"Then one of the twelve, called Judas Iscariot, went unto the chief priests, And said unto them, What will ye give me, and I will deliver him unto you? And they covenanted with him for thirty pieces of silver."

Scripture: Matthew 26:39
"And he went a little further, and fell on his face, and prayed, saying, O my Father, if it be possible, let this cup pass from me: nevertheless not as I will, but as thou wilt."

Object Lesson: A clear or paper nut sized cup that fits in the egg.

Scripture: Matthew 27:1-2
" When the morning was come, all the chief priests and elders of the people took counsel against Jesus to put him to death: And when they had bound him, they led him away, and delivered him to Pontius Pilate the governor."

Object Lesson: A piece of rope or cord.

Scripture: Matthew 27:24-26
"When Pilate saw that he could prevail nothing, but that rather a tumult was made, he took water, and washed his hands before the multitude, saying, I am innocent of the blood of this just person: see ye to it. Then answered all the people, and said, His blood be on us, and on our children. Then released he Barabbas unto them: and when he had scourged Jesus, he delivered him to be crucified."

Object Lesson: A piece of soap.

Scripture: Matthew 27:28-30
"And they stripped him, and put on him a scarlet robe. And when they had platted a crown of thorns, they put it upon his head, and a breed in his right hand: and they bowed the knee before him, and mocked him, saying, Hail, King of the Jews! And they spit upon him, and took the reed, and smote him on the head."

Object Lesson: A piece of red fabric and rose thorns.

Scripture: Matthew 27:31-32
"And after that they had mocked him, they took the robe off from him, and put his own raiment on him, and led him away to crucify him. And as they came out, they found a man of Cyrene, Simon by name: him they compelled to bear his cross."

Scripture: Matthew 27:35-36
"And they crucified him, and parted his garments, casting lots: that it might be fulfilled which was spoken by the prophet, they parted my garments among them, and upon my vesture did they cast lots. And sitting down they watched him there;"

Scripture: Matthew 27:50-51, 54.
"Jesus, when he had cried again with a loud voice, yielded up the ghost. And, behold, the veil of the temple was rent in twain from the top to the bottom; and the earth did quake, and the rocks rent; now when the centurion, and they that were with him, watching Jesus, saw the earthquake, and those things that were done, they feared greatly, saying, Truly this was the Son of God.."

Scripture: Matthew 27:58-60.
"He went to Pilate, and begged the body of Jesus. Then Pilate commanded the body to be delivered. And when Joseph had taken the body, he wrapped it in a clean linen cloth, And laid it in his own new tomb, which he had hewn out in the rock: and he rolled a great stone to the door of the sepulchre, and departed."

Object Lesson: A piece of white linen or cloth.

Scripture: Matthew 27:60, 65-66.
"And laid it in his own new tomb, which he had hewn out in the rock: and he rolled a great stone to the door of the sepulchre, and departed. Pilate said unto them, Ye have a watch: go your way, make it as sure as ye can. So they went, and made the sepulchre sure, sealing the stone, and setting a watch."

Scripture: Mark 16:1.
"And when the Sabbath was past, Mary Magdalene, and Mary the mother of James, and Salome, had bought sweet spices, that they might come and anoint him."

Object Lesson: Frankincense or a spice such as cloves.

Object Lesson: Empty, except for the scripture verse, because the tomb was empty.

Each month, I write newsletters with helpful tips that impact homeschool moms on topics such as: homeschooling, homeculture, momculture, and home management. I also inform moms of site news, upcoming events, new products, and special offers.