Are You Stuck in Chore Wars? 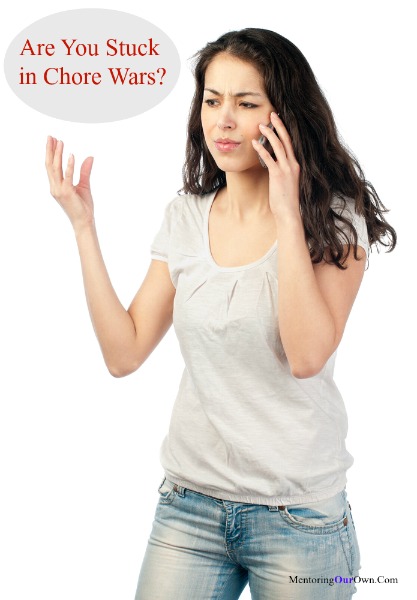 I was once stuck in "Chore Wars." What are Chore Wars? Chore Wars move from assigning (and expecting), to bribing a child with rewards, to nagging a child to work, and then to threatening a child with loss of reward, loss of privilege, or punishment. This happens when children are not developmentally ready for self-directed, independent work and those children who have not been trained in work habits.

I brought personal habits and established routines to my marriage. When I later had children, I began my parenting with domestic routines already in place. I did not want to have TV as the center of our family life. I chose not to have one at that time. When my children came along I included them early into my routines, rather than entertain them as I worked. Together, we loaded / unloaded the dishwasher, made meals, sorted laundry, dusted, grocery shopped and put away those groceries.Toys were sparing at first, so were not much a chore to clean up. These patterns were gently ingrained and they began to do things and develop good habits of work.

My children walked and talked early. I made assumptions that were misguided and it led to struggles. My second child put a large wood puzzle of the US together at 26 months, had been walking since 8 months (10 months for is older brother and 6 months for his younger sister), and was beginning to read without formal reading and phonics lessons. I knew he could work because I had seen him work.

The capacity to work and doing self directed chores are not the same, require different skills and different levels of brain development. I did not realize that he (and his siblings) had been trained in habits by doing things with me for so long. It was misguided to come to the conclusion that he understood my request to clean his room that he had the development and know how to follow through. I was not alone in this error. Many, many, parents come to the same conclusion, just because a child can talk. I have watched too many parents insist that their two or three year old "fully" understands and can do what was asked, but was just being disobedient or stubborn.

Little children are not little adults, their brain, bodies, judgement and executive function are still developing. Too many parents are frustrated due to the same kinds of unrealistic expectations and lack of training of small children. I was one of those frustrated parents. How hard can it be to pick up clothes and put them in the hamper of toys and place them in the toy box?

To follow an order to clean a room takes more than understanding the request and more than physical capability to lift and place objects in containers, on shelves, away or in the hamper. What may be clear to an adult, can be overwhelming to an untrained child. Adults have a more mature brain and more experience. Adult brains have developed organizational ability and executive function. Neither are capacities that are inborn, nor switches in the brain that flip on at a certain age. These are both developed through training.

My children were seven, five, and three when I began assigning them chores. A friend with older children taught me the "demonstrate, observe, and do" method to teaching chores. First, I did it once for them and had them observe. Then I did it once with them. Then I observed them doing it once. Unlike the other work I did with them for years, I did not take time to lay down the discipline of habits of the chores. Like any discipline children may study in school, chores are disciplines. My oldest was in school, the younger two were not. I was expecting daily habitual discipline in completing chores, without the foundation! To make matters worse, I treated them as adult employees and paid them to do the chores as an incentive. If they completed 75% of chores in a week, I doubled their pay. For 15 years we tried weekly, quarterly, monthly, and daily chore changes. I fell into nagging, removing the distraction of screens, taking away privileges, assigning more work and at times yelling or lecturing. We were not happy!.

Through a homeschool support group, God touched my heart and provided me with the remedy. Stay tune for my next post to learn how I changed and what I did to overcome the chore wars!